OUR PROGRAM IS FREE TO SCHOOL HAM RADIO CLUBS CLICK HERE TO ASK...

If you need help installing the program, let me know and I can login remotely to your pc and see what is going on with the installation.

I made sure that my program works nicely with Windows 10..., that is what I am currently
using on my computers.
Added some fields so it changed the look a bit.
here is the latest screen shot....

January 20, 2012:  VERSION 7.6 - - QRZ Callsign Lookup...I noted that QRZ changed the syntax for looking up
callsigns on their website which I have built into the HamLogBook Program. So, I had to rewrite it.
For those of you that use this feature.., send me an email and I will send you a download link for
the new version.  As far as all the data you have in the existing version of HamLogBook, there is
no easy way to just automatically transfer it over. So, if you want, send me your   .mde  file in an
email and I will transfer your data over to a new version of HamLogBook.
You can email me at:  reakevinscott@gmail.com

October 26, 2011:  New Version 7.5
I finally think I have the hamlogbook program so it will install ok on windows vista and windows 7.
The new package is much bigger though., about 176mb in size.
I added a floating UTC Clock that you can move to anywhere on the screen or just close it if you don't want it there...

December 2, 2010:  Installing on Windows 7
It has occurred to me that when installing this application on a windows 7 machine, and you click the icon to launch it, it will not launch.
This is because I have the program set to install under   C:\Program Files\    and windows 7 will not install it in that location.
So, after installing, in file explorer, go to the installation directory, which should be:  C:\Program Files (x86)\Ham Log Book V74\
and create a desktop shortcut for the program file of the hamlogbook program  "HamLogBook.mde"  .
Use this icon to start the program.
I am currently working on a fix for this problem.

September 13, 2016
If you have a problem running the version 10 of Ham Log Book, and you get this kind of error window, 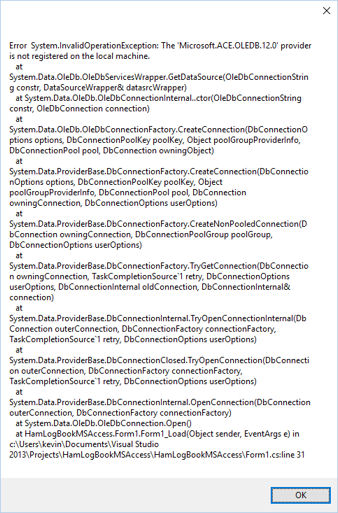 tThen install this patch and it should fix it...click here for 32 bit version...

tThen install this patch and it should fix it...click here for 64 bit version...

August 29, 2015
I just added a youtube video that shows the basics of how to use my new hamlogbook for android program.
You can view it at:  http://rxfactory.shop/?coupon=ApuaMvfOQ/

August 25, 2015
I have just created my first version of HamLogBook for Android.
It will be available any day now the the google play store.
It is called "Ham Log Book for Android v1.2"
Here are some screen shots..
I will soon do a video on Youtube.com to show how to use it.
It will work with android version API 15(Ice Cream Sandwich) through the current API 22(Lollipop)
Here are some Screen shots...click here...
You can now purchase this on Google Play for your android at this url:
http://rxfactory.shop/?coupon=ApuaMvfOQ/
Or, Just go to Google Play in your android and search for 'Ham Log Book'


July 21, 2015
The HamLogBook program is written in MS Access 2010.
I have now made a new version, V10 that is written in C#.
I wanted to use a different language in writing the hamlogbook program so the user would
not need the ms access runtime, and it makes the whole software package smaller...
The ms access version is about 205mb, the c# version is about 55mb.
The new version v10 will only run on windows vista and later software, it will not run on windows xp.
I have made an instructional video for this new version and placed it here on YouTube.com


January 26, 2014
I made a little instruction video on the basic use of this program and I put it up on youtube.
You can watch it here >  http://rxfactory.shop/?coupon=ApuaMvfOQ/;feature=youtu.be

December 21, 2013
I made the programs UTC Date/Clock automatically detect your time zone and any daylight saving time offset from
your pc.  So, there is no universal time offset to set any longer under the Utility Menu.

September 22, 2013
It was brought to my attention that the END Time UTC and the Time Length Field did not work correctly.
I think I have got them fixed in the new version 7.7

January 31, 2010:  Version 7.4 !!
In this latest release, I added buttons so you can see all the states and countries you have worked so far.
Here is what the new screen looks like....

April 9, 2009:  Version 7.3 !
In this latest release, I changed the background image of all the screens to a world background.  Just time for a change.  Here is what the new screen looks like.... 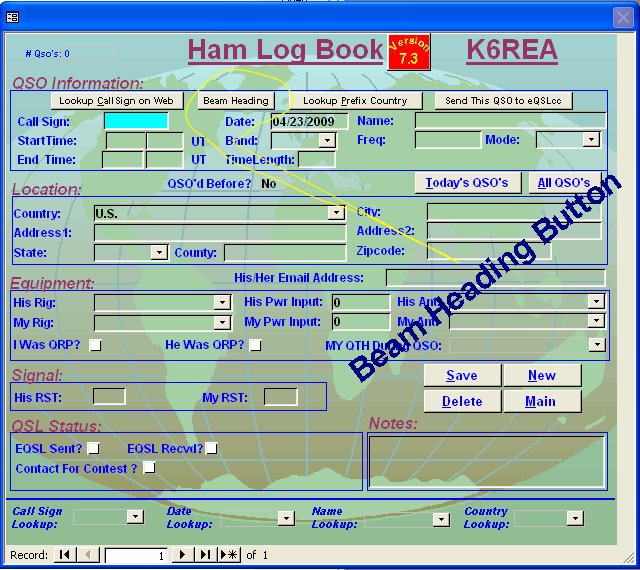 I also added the feature to lookup Beam Headings to the destination of the station you have logged on the screen.  I wanted this for my new HF Beam.
The online database I use does not have all cities around the world, but you can put in a major one when the screen comes up and get close.
Here is what the Beam Heading Lookup screen looks like.... 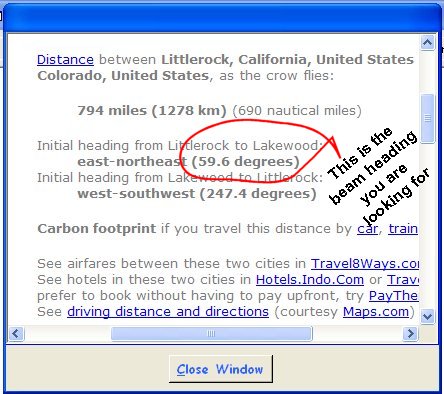 February 17, 2009: Version 7.2 !!
Today I added the feature to have multiple QTH's for your calls.  That way you can select from a drop down list which QTH you were at when you
had the QSO, such as home, mobile, cabin and so forth.